Certain safeguards that normally protect the worker may have to be removed when repair or maintenance work is performed. When this occurs, the hazards involved need to be identified and a safe work system developed to eliminate or control these hazards A safe work permit is document that identifies the work to be done, the hazard(s) involved, and the precautions to be taken. It ensures that all hazards and precautions have been considered before work begins. Safe work permits should always be used when work is performed by an outside agency or employer. 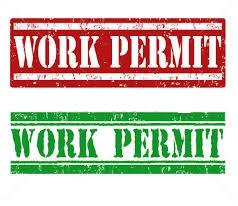 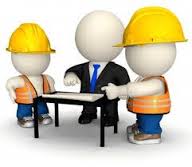 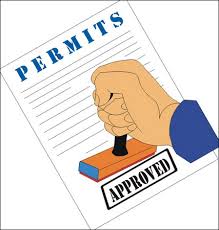 What is a safe work permit?

A safe work permit is a written record that authorizes specific work, at a specific work location, for a specific time period. Permits are used for controlling and co-coordinating work to establish and maintain safe working conditions. They ensure that all foreseeable hazards have been considered and that the appropriate precautions are defined and carried out in the correct sequence. The permit is an agreement between the issuer and the receiver that documents the conditions, preparations, precautions, and limitations that need to be clearly understood before work begins. The permit records the steps to be taken to prepare the equipment, building, or area for the work, and the safety precautions, safety equipment, or specific procedures that must be followed to enable the worker(s) to safety complete the work. The safe work permit helps to identify and control hazards, but does not, by itself, make the job safe.

Who benefits from a work permit program?

Why use a work permit?

All work exposes the worker to some degree of hazard. This degree of hazard determines the type of safeguards required to protect the worker. Most routine work has defined safe work practices or procedures. In the absence of such procedures, safe work permits should be used. Workers engaged in maintenance work may be at risk if the machinery they are working on is started unexpectedly. Such machinery and equipment needs to be isolated by blanking, blinding, or a power lockout system. 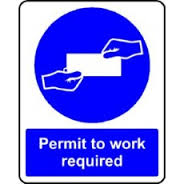 These procedures can be clearly identified by a work permit system. Certain types or conditions of work, such as confined space entry, flammable or explosive situations, exposure to harmful substances or high voltage electrical equipment, and the transfer of hazardous work from one work shift to the next are examples of where safe work practices or the use of work permits is essential. Occupational Health and Safety (OHS) Act and OHS Regulation require employers to provide workers with a safe place of work and to identify known safety hazards. This can be partly achieved through the use of a safe work permit system. Verbal instructions can be misinterpreted or forgotten, whereas a great deal of control is achieved through the use of safe work practices or safe work permits.

The type of safe work permit required is determined by the nature of the work to be performed and the hazards that must be controlled or eliminated. The range of activities and locations makes it impossible for a single type of permit to be suitable for all situations. The following types are most commonly used and examples are provided at the end of this Safety Bulletin.

Hot work permits are used when heat or sparks are generated by work such as welding, burning, cutting, riveting, grinding, drilling, and where work involves the use of pneumatic hammers and chippers, non-explosion proof electrical equipment (lights, tools, and heaters), and internal combustion engines. 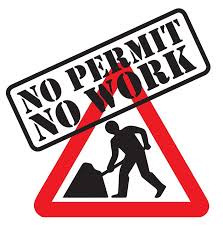 Three types of hazardous situations need to be considered when performing hot work:

(a)the presence of flammable materials in the equipment;

(b)the presence of combustible materials that burn or give off flammable vapors when heated; and

(c)the presence of flammable gas in the atmosphere, or gas entering from an adjacent area, such as sewers that have not been properly protected. (Portable detectors for combustible gases can be placed in the area to warn workers of the entry of these gases). 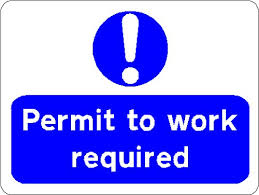 Confined space entry permits are used when entering any confined space such as a tank, tower, pit or sewer. The permit should be used in conjunction with a “Code of Practice” which describes all important safety aspects of the operation.

The purpose of The Work at Height Regulations 2005 is to prevent death and injury caused by a fall from height. If you are an employer or you control work at height (for example facilities managers or building owners who may contract others to work at height) the Regulations apply to you.

Employers and those in control of any work at height activity must make sure work is properly planned, supervised and carried out by competent people. This includes using the right type of equipment for working at height. Low-risk, relatively straightforward tasks will require less effort when it comes to planning.

Employers and those in control must first assess the risks.

Employees have general legal duties to take reasonable care of themselves and others who may be affected by their actions, and to co-operate with their employer to enable their health and safety duties and requirements to be complied with.

Working at height remains one of the biggest causes of fatalities and major injuries. Common cases include falls from ladders and through fragile surfaces. ‘Work at height’ means work in any place where, if there were no precautions in place, a person could fall a distance liable to cause personal injury (for example a fall through a fragile roof).

This section shows how employers can take simple, practical measures to reduce the risk of any of their workers falling while working at height.

Dos and don’ts of working at height

An electrician is a tradesperson specializing in electrical wiring of buildings, stationary machines, and related equipment. Electricians may be employed in the installation of new electrical components or the maintenance and repair of existing electrical infrastructure. Electricians may also specialize in wiring ships, airplanes, and other mobile platforms, as well as data and cable.

An EEWP (Energized Electrical Work Permit) is a document that clearly describes the following:

The EEWP document should also include a section for the Electrically Qualified Person to assess the task at hand and determine if the job can be done safely. In order to do this he or she must be able to provide the following information:

The document shall include the signatures (and dates) of the following personnel:

Did you know that if a worker is injured or killed while working on energized equipment one of the first things an OSHA inspector may ask to see is a copy of Energized Electrical Work Permit (EEWP) for that particular job or task?

An electrical arc flash fatality occurs once every 28 hours in the United States alone and over 2,000 more workers are treated annually with injuries due to arc flash hazard incidents. According to the Electrical Safety Foundation International (ESFI) between the years 2002 and 2007 1,213 workers were killed in the workplace and another 13,150 were severely injured all due to some sort of electrical related accident. Every one of these incidents was inspected by OSHA to determined whether or not the business or facility at fault is in compliance with OSHA and NFPA 70E regulations.

So, the point is, don’t get caught not using and mandating the use of an Energized Electrical Work Permit in your facility! OSHA’s fines associated with such an infraction could total over several hundred thousand dollars alone. Not to mention the legal costs associated with bodily injury or death should an incident occur. A sample EEWP and more information can be found in Annex J of the NFPA 70E standard.

What is the difference between an excavation and a trench?

OSHA defines an excavation as any man-made cut, cavity, trench, or depression in the earth’s surface formed by earth removal. This can include excavations for anything from cellars to highways. A trench is defined as a narrow underground excavation that is deeper than it is wide, and no wider than 15 feet (4.5 meters).

What are the dangers of trenching and excavation operations?

Trenching and excavation work presents serious hazards to all workers involved. Cave-ins pose the greatest risk and are much more likely than other excavation-related accidents to result in worker fatalities. Other potential hazards include falls, falling loads, hazardous atmospheres, and incidents involving mobile equipment.

Scaffolding, also called scaffold or staging, is a temporary structure used to support a work crew and materials to aid in the construction, maintenance and repair of buildings, bridges and all other man made structures. Scaffolding is also used in adapted forms for formwork and shoring, grandstand seating, concert stages, access/viewing towers, exhibition stands, ski ramps, half pipes and art projects.

Specialized components used to aid in their use as a temporary structure often include heavy duty load bearing transoms, ladders or stairway units for the ingress and egress of the scaffold, beams ladder/unit types used to span obstacles and rubbish chutes used to remove unwanted materials from the scaffold or construction project.

Industrial radiography is the use of ionizing radiation to view objects in a way that cannot be seen otherwise. It is not to be confused with the use of ionizing radiation to change or modify objects; radiography’s purpose is strictly viewing. Industrial radiography has grown out of engineering, and is a major element of nondestructive testing. It is a method of inspecting materials for hidden flaws by using the ability of short X-rays and gamma rays to penetrate various materials. Two ways to inspect materials for flaws is to utilize X-ray computed tomography or Industrial computed tomography scanning.

Electrical Risks in the Workplace