Crystalline silica is an important industrial material found abundantly in the earth’s crust. It is a mineral that occurs in several forms. Quartz, the most common form, is a component of sand, stone, rock, concrete, brick, block, and mortar. Many of these materials are used every day across a wide variety of industrial settings, including construction, mining, manufacturing, maritime, and agriculture.

Occupational exposure to crystalline silica often occurs as part of common workplace operations involving cutting, sawing, drilling, and crushing of concrete, brick, block, rock, and stone products (such as in construction work). Operations using sand products (such as glass manufacturing, foundries, and sand blasting) can result in worker inhalation of small (respirable) crystalline silica particles from the air. These types of exposures can lead to the development of disabling and some times fatal lung diseases, including silicosis and lung cancer. Processes historically associated with high rates of silicosis include sandblasting, sand-casting foundry operations, mining, tunneling, cement cutting and demolition, masonry work, and granite cutting.

This page offers guidance that may be useful to workers and employees across a number of industries. Resources for general industry and construction are highlighted where appropriate

OSHA regulations for occupational exposure to crystalline silica are addressed in specific standards for general industry, shipyard employment, and the construction industry.

Silica, often referred to as quartz, is a very common mineral.  It is found in many materials common on construction sites, including soil, sand, concrete, masonry, rock, granite, and landscaping materials.

The dust created by cutting, grinding, drilling or otherwise disturbing these materials can contain crystalline silica particles.  These dust particles are very small. You cannot see them. This respirable silica dust causes lung disease and lung cancer. It only takes a very small amount of airborne silica dust to create a health hazard.

Recognizing that very small, respirable silica particles are hazardous, the Occupational Safety and Health Administration (OSHA) regulation 29 CFR 1926.55(a) requires construction employers to keep worker exposures at or below a Permissible Exposure Level (PEL) of 0.1 mg/m3 (click here to learn more about the PEL).  The National Institute for Occupational Safety and Health (NIOSH) has a lower Recommended Exposure Level (REL) of 0.05 mg/m3.

OSHA regulates silica exposure using the permissible exposure limit (PEL), which is the maximum amount of airborne dust an employee may be exposed to during a full work shift.

The PEL is dependent on the amount of crystalline silica that is present in the dust. The equation for this calculation is given below. For the most part, OSHA is more concerned with the respirable fraction of the sample because it is more hazardous; however, both respirable and total dust equations are shown. The following parameters are necessary to calculate the PEL and the exposure level.

What are the possible exposure sources?

Crystalline silica can be found in certain types of natural materials, such as:

Typical construction materials made from these natural ingredients include:

These become some of the sources of exposure associated with a number of the construction trades.

Airborne exposure to crystalline silica dust can depend on a number of things, such as: 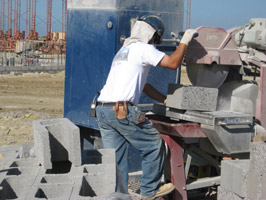 5. How long the dust-generating activity goes on in a shift 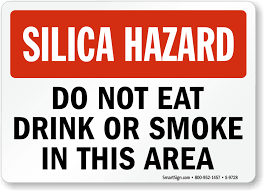 Cal/OSHA has established regulatory permissible exposure levels for silica that varies depending on the form of silica (quartz, fused, tripoli, tridymite and cristobolite) and particle sizes present. These allowable exposure levels are reflective of an employee’s average exposure throughout an 8-hour shift. There is a difference between “total” and “respirable” silica dust, in that “respirable” silica dust is more likely to get into the deep parts of the lungs and cause more serious damage.

Each year, hundreds of workers die from illnesses caused by breathing in silica and thousands more become ill.

Any construction worker who performs one or more of the following tasks with any of the materials listed below is at risk of being exposed to hazardous levels silica dust.  If you work close by someone generating silica dust you may be at risk.

What are the Health Effects?

Inhaling crystalline silica can lead to serious, sometimes fatal illnesses including silicosis, lung cancer, tuberculosis (in those with silicosis), and chronic obstructive pulmonary disease (COPD). In addition, silica exposure has been linked to other illnesses including renal disease and other cancers. 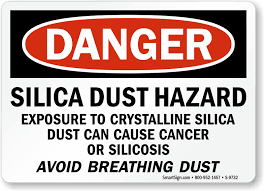 Silica causes permanent lung damage that can be disabling and potentially lead to death. When workers inhale crystalline silica, the lung tissue reacts by developing fibroid nodules and scarring around the trapped silica particles. If the nodules grow too large, breathing becomes difficult.

Silica exposure can cause silicosis and people with silicosis are also at a higher risk of developing tuberculosis. There is no cure for silicosis, but it is 100% preventable. The three types of silicosis are:

Silica and other dusts also cause COPD. COPD includes chronic bronchitis, emphysema, bronchitis, and chronic airway obstruction. In 1999, COPD ranked as the fourth leading cause of death with over 124,000 deaths. COPD is projected to become the third most common cause of death worldwide by 2020.

Symptoms from both silicosis and COPD may not be obvious and can initially include shortness of breath, chest pain, or a persistent cough.  Silicosis and COPD can be severe enough to cause respiratory failure, which may eventually lead to death.

To make sure your doctor is aware that you may have been exposed to silica on the job, and is well informed on the signs, symptoms, and diagnosis of silica related illness, we recommend bringing a Physician’s Alert to your appointment.

Your medical examinations should include:

There is no specific treatment for silicosis. Workers are advised to avoid further exposures to silica to prevent the disease from getting worse, limit exposure to irritants, and quit smoking. Antibiotics are prescribed for respiratory infections as needed. Those with a positive skin test for tuberculosis (TB) generally need treatment with anti-TB drugs. Any change in the appearance of the chest x-ray may be a sign of TB.  Patients with severe silicosis may need to have a lung transplant.

Treatment of COPD includes inhaled bronchodilators, anti-cholinergic agents or steroids, with antibiotics prescribed for respiratory infections as needed.  As with silicosis, it is important to limit exposure to irritants and quit smoking.

In 1996, the World Health Organization – International Agency on Cancer Research (IARC) first classified silica as a known human carcinogen and in 2009, IARC reaffirmed its position noting “[an] increased risk of lung cancer [from silica exposure] was observed across various industries and processes.”

The National Cancer Institute completed a study in 2011 showing that lung cancer screening saves lives.  Based on that study the American Lung Association recommends lung cancer screening with low-dose CT scans for current or former smokers who are between 55 to 74 years, with a smoking history of at least 30 pack-years (that is, an average of a pack a day for 30 years) and with no history of lung cancer.

Controlling Exposures in Construction While: 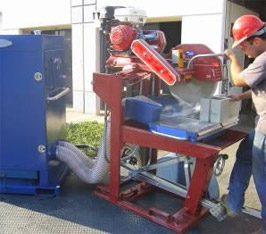 Controlling the exposure to silica in construction can be done through engineering controls, administrative actions,& personal protective equipment (PPE),similar to practices in other industries. Engineering controls include such things as replacing silica with another material (substitution), isolating an exposure source, and using ventilation systems. Administrative actions include limiting workers’ exposure time and providing showers. Use of PPE includes wearing proper respiratory protection and protective clothing. The following references aid in controlling crystalline silica hazards in the workplace.

The following solutions are listed in order of preference. (Depending on the work site a higher choice may actually be less effective.):

Use a silica substitute

This is especially important for sandblasters, where the abrasive blasting is often done outside and in different locations, making it impossible to install an engineering control. The most severe silica exposures occur in abrasive blasting.

Eliminating the silica means using a different, safer material in place of the silica-containing substance.  It is true that in some cases it is not possible to use a substitute in place of silica, but for many operations, such as abrasive blasting, there are many possible substitutes, including those below.

Keep silica out of the air

What employees can do to reduce silica intake

Personal protective equipment against silica includes respirators and masks.  Respirators should be used only when the dust controls cannot keep dust levels below the NIOSH Recommended Exposure Level.

There are many types of respirators,  from air-purifying to air-supplying and from a nose and mouth covering to a full body respirator.  You can receive guidance on selecting a respirator from: